Choosing the correct power of a rifle scope is one of the most important parts of the selection process. As a general rule of thumb the lower the scopes power the larger its field of view. A larger field of view usually means quicker target acquisition, so these lower powered scopes are often utilized by those that hunt in thick cover where quick shots at close targets are frequent. Higher magnifications are often favored by those hunting open country or fields where the shots are often several hundred yards and accuracy not speed is the main concern. Many of today's riflescopes are variable power meaning that the magnification can be adjusted. However, there are still some fixed power scopes being manufactured for those who prefer that style of optics.

Comparison Charts
Rifle Scope Spy has put together side by side comparisons of rifle scopes in some of the most popular magnification ranges:1-4x24, 2-7x33, 3-9x40, 3-9x50, and 4-12x40. When comparing these models the base models were used whenever possible. Generally the base models were matte finish with a stand duplex reticle. Scopes were then grouped by price for your convenience. 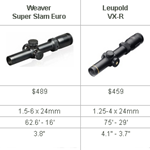 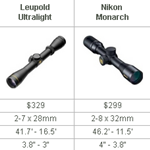 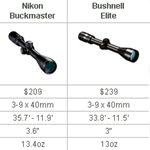 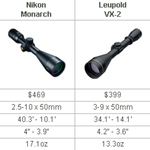 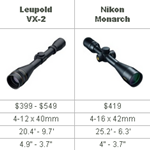 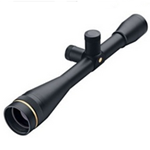 Picture
After the name of the scope is a row of pictures which are representative of the scope series being compared, and whenever possible a picture of the exact configuration is used. This allows a quick overview of the shape and style of the scope.

Estimated Price
An estimated price is listed under each scope in the comparison chart, this gives you a quick idea of what you could expect to pay for a particular scope online. This price is an estimate and sales, discounts, promotions and price drops in general can significantly change the price, you can click the picture above the price for the most recent prices on Amazon.com which generally features the prices from Amazon.com as well as several other major online retailers.

Magnification and Objective
While the comparison charts are organized by magnifications such as 2-7x33 often different manufactures will have slightly different configurations such as 2-7x32, or 2-8x32; so these models have been included because of their very similar specifications. For those new to the optics game a 2-7x33 means that the scope has a variable magnification ranging from 2x to 7x and the objective lens diameter(the scope lens closest to the muzzle) is 33mm.

Eye Relief
The distance your eye is from the scope when you can see a complete sight picture. Most rifle scopes have an eye relief of between 3” and 5”. The eye relief of a scope may also change as the magnification is adjusted, the higher the magnification is adjusted the smaller the eye relief. For example, a 2-7x33 scope might have 4” of eye relief at 2x but only 3.5” when on 7x. It is important to note that some scopes have a much wider range of eye relief than others, generally speaking the less variation in eye relief the better.