Well respected hunting optics maker Burris has a complete lineup of glass for the outdoorsman. Burris scopes mostly fall in the top end of the mid level category and continue up into the high end category. While many hunters will recognize the various models of Burris rifles scopes, they also make binoculars, spotting scopes, and red dot scopes. Furthermore, they have established themselves as a front runner in the rifle scope rings category, with their Signature series rings which feature inserts that help protect a scope from scratching as well as aid in correctly lining up the scope. While many hunters will only shoot a certain brand of rifle scope it is amazing the number of shooters that choose to use these rings.

Burris has also been a front runner in innovation in the rifle scope area. With a laser rangefinder scope model, a model designed for the AR-15, and numerous projection type sights. However, their most popular series of rifle scope is still the Fullfield II, which is a proven traditional style big game scope series. Below are some of the most popular Burris scopes on the market along with what magnification models are available and pricing estimates

Burris Eliminator III - A range finding rifle scope, the Eliminator III is not just a scope that can tell you the distance to the target as the rangefinder component of this model is very much integrated with the scope part of this unit. The Burris Eliminator III scope can basically be programmed to your particular cartridge's ballistic information; the scope then uses the rangefinders' distance and the programmed ballistic data to calculate an aiming point, this calculated hold over information is then represented by a red dot on the lower bar of the scope's reticle which indicates where you should hold on the target.

Burris Veracity - The Veracity line of scopes come in four unique configurations all of which feature a 5x magnification ratio (many standard scopes feature a 3x magnification ration such as a 3-9 variable power scope). The wide magnification ranges of the Veracity scopes make them suitable for a variety of different hunting situations. These models also feature a first focal plane which means that the ballistic reticles available on these scopes will increase or decrease in proportion to the target as the magnification is moved, allowing the reticle to be accurately used at any magnification. 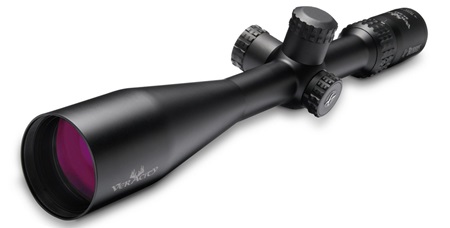 Burris C4 Plus - A new scope series that includes both 1" and 30mm main tube models. These scopes feature a unique custom dial system where the owner can send in for a custom elevation dial based on the ballistics or their favorite rifle. The C4 Plus also features a MOA reticle that has windage hash marks but very few elevation marks providing a clearer sight picture for those the like to adjust for elevation but hold off the target for wind.

Burris Fullfield E1 – The Fullfield E1 rifle scope series is very similar to the Fullfield II line. Although there are a few differences between the two series the most noteworthy feature is that the E1 scopes feature a Plex E1 reticle which is a reticle that consists of holdover hash marks with the addition of windage dots for providing aiming points at various distances calculated for a 10MPH wind. Burris recently added a few 30mm main tube options to this line up as well and one model with and illuminated reticle. Big Game Hunt wrote a nice review comparing the Fullfield E1 vs Fullfield II scope lines. 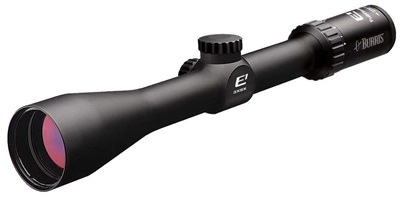 Burris Fullfield II - is still probably the most popular model in the Burris rifle scope lineup. The Fullfield II is available in a wide variety of magnifications and options, with choices all the way from a 2-7 x 35mm to a 6.5-20 x 50mm. Many models are available in a camouflage finish and carry the Burris Forever Warranty.

Burris Predator Quest - Burris collaborated with expert coyote caller/hunter Lee Johnson and introduced the new Burris Predator Quest line of rifle scopes. These scopes all feature the Burris Ballistic Plex E1 reticles which feature holdover marks out to 500 yards. Currently there are three different configurations, two of which are available with a camo finish, and all models come with an thread on anti reflective device to help reduce scope glare.

Burris Timberline – The Timberline scope line is designed for those who need a compact scope but want the higher magnification range found on larger scopes. There are currently two configurations available a 3-9x32mm and a 4.5-14x32, the latter features a an adjustable objective for parallax correction, and both configurations feature the Burris Ballistic Plex reticle which features several hold over hash marks to aid in long range shooting. 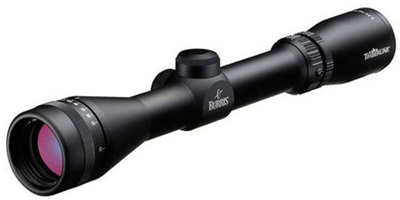 Burris Droptine - Burris added another value line of hunting optics to their riflescope line up with the Droptine models. These are some of the most affordable scopes Burris makes and come in several configurations suitable for hunting big game. These scopes come with a simple ballistic plex reticle that doesn't have the added windage marks of some of the higher end Burris scopes; and there is also both a slug gun and .22lr option of this scope in the 2-7x35 model. There is also one 4.5-14x42 model that is equipped with a G2B Mil-Dot reticle which is like a Mil-Dot reticle but with hash mark half way between the dots for more precise aiming. 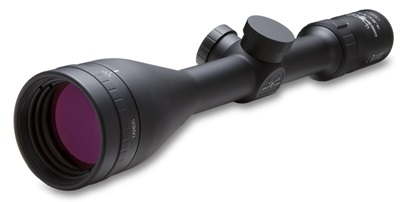 Burris Scout - While the forward mounting of a scope ahead of were the cartridges are loaded is a popular technique on many scout rifles; there is a shortage of optics that are designed for this particular application. The Scout line was designed to, as the name implies, be mounted on these "scout" style rifles. Currently there are only two options one a straight 2.75x power model and the other a variable 2-7x model; the 2.75x fixed power model features a heavy duplex reticle while the 2-7x variable model features a basic ballistic style holdover reticle. 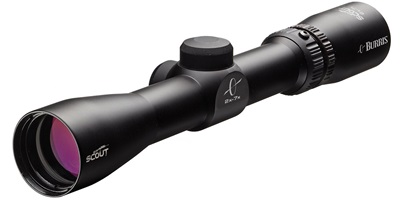 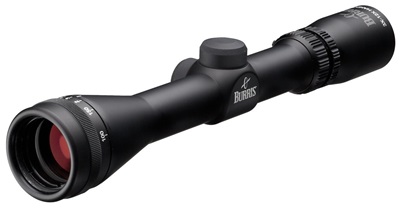