Aimpoint optics are considered by many to be the pinnacle of red dot scopes.  These sights aren’t aimed at the budget minded user, and while Aimpoints are popular with military, and law enforcement personnel, they also have a very strong following in the civilian market. 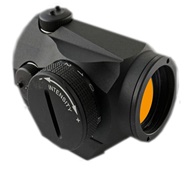 Quality – One of the first signs of the quality of an Aimpoint red dot sight is their battery life; other manufactures that use the same batteries get no where near the battery life of Aimpoint optics. These units are made in Sweden as opposed to many cheaper models which are often made in China. Also, many models in the Aimpoint line are used by military and law enforcement sectors and are therefore built with durability and dependability in mind.

Battery Life – Aimpoints are known for having incredible battery life; so much so that you can actually measure battery life in years rather than hours. These models are powered by a variety of different battery options depending on the model. Batteries used as power sources include: CR 2032, DL 1/3N, and AA. Regardless of what type of battery any particular model uses it won’t have to be changed very often.

Variety – These scopes are available in many different series and models with options for tactical use, recreational use, and even hunting. The variety of shapes and styles in the Aimpoint red dot line up is extensive with some options being 9” long and weighing over nine ounces, and other models being less than 2.5” and weighing three ounces. Furthermore, many models are available with or without night vision capability giving the shooter even more options within a particular series.

Aimpoint ACO – The ACO, which stands for Aimpoint Carbine Optic, is currently the most affordable Aimpoint optics. In many ways it is very similar to the Aimpoint PRO, however it uses a different mount, is not compatible with night vision devices, comes without lens caps and features a 10,000 hour battery life as opposed to the 30,000 hour battery life of the PRO model. These minor concessions, especially for those not planning on using the night vision modes on a PRO, result in an Aimpoint that can usually be found for under $400.

Aimpoint PRO – The PRO, which stands for Patrol Rifle Optic, features a 2 MOA dot and is run by a DL 1/3N battery which gives the unit power for about 30,000 hours of use on a medium high brightness setting. The Aimpoint PRO can be used with Night Vision equipment and is waterproof to 150 feet. The Patrol Rifle Optic also comes with a mount suitable for use on a Picatinny rail and includes a riser for use on AR-15 style rifles when the operator wants to co-witness the optic with the front sight.

Aimpoint T1 & H1– The smallest and one of the most popular optics in the line up is the T1 series red dot sight. The Aimpoint Micro T1 is only 2.5” long, weighs 3.7 oz with a mount, and can be had with a 2MOA or 4 MOA  red dot reticle. The T1 is waterproof to 80 feet, works with night vision devices, and runs off a CR 2032 battery. Because of its small size this sight can be used on a huge array of different weapons, and can be used alone or with a magnifier as a primary optic, or even mounted on top of a traditional scope and used as a secondary optic. For those that don’t need night vision compatibility, the H-1 series is very similar to the T-1 with a few minor changes to the finish and waterproof rating and sells at a noticeable discount to the T1 model.

Aimpoint T2 & H2 – Think of the T2 and H2 as an more of an upgraded T1 and H1; rather than a completely new design with the new versions having two major differences from the previous models. First, the new T2 and H2 have a new housing that better protects the elevation dial. Second, these new models feature a new lens coating that is suppose to improve the clarity of the optic. However, these new models are only available with a 2 MOA dot so those wanting a 4 MOA will have to stick with the previous T1 and H1 models for now.

Choosing Sides in the Aimpoint vs EOTech Debate