EOtech sights are pretty much in a class by themselves; while similar to a red dot sight in appearance, they work in a much different manner than most red dot optics.  EOTech holographic sights are like the now discontinued Bushnell Holosight in that they both use holographic technology to produce a reticle, as opposed to red dot sights which project the reticle from the back of the optic onto a lens in the front of the optic. Despite using an entirely different technology these optics compete directly with Aimpoint sights and other high end red dot sights. 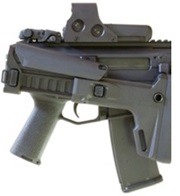 Common Features – Eotech optics are listed as being waterproof to various depths ranging from 3ft to 66ft with the exception of the XPS2-RF which is a rimfire version that is listed as water resistant. All models are equipped with an auto shutdown feature and the user can select between a four or eight hour automatic shutoff time. EOTech sights are also equipped with a low battery warning system that will cause the unit’s reticle to flash when first powered up if the battery is getting low.

Reticles – While these sights are available in a number of different reticle styles, the most common reticle used on these sights is a large ring with center dot. The outside 65MOA ring of this reticle helps the user quickly locate the reticle on the screen while the center 1MOA dot allows for more precise shots. There are also reticles that are calibrated for specific cartridges with models setup for the .223 Remington or .308 Winchester.

EoTech 512 – The 512 is one of the most popular models sights in the line up, and can be had with the following finishes: Black, Mossy Oak, or Realtree. The model 512 features the large circle with dot reticle and is suitable for use on an array of firearms for a variety of different shooting and hunting applications. The 512 sight is powered by two common AA style batteries, and battery life at a medium setting should be about 1,000 hours. The EOTech 512 is the only model to be offered with camo pattern finishes and is the most affordable EOTech holographic sight in the line up.

Eotech XPS2 & XPS3 – These sights are more compact than the above mention 512 model, measuring only 3.5 inches long and weighing in at 9 ounces. They are powered by a single CR 123 battery and are listed as having approximately a 600 hour runtime. The XPS2 and XPS3 are nearly identical with the main exception being that the XPS3 version is night vision compatible. The XPS 2 and XPS3 models feature the operating controls on the rear of the unit so those looking to mount a magnifier might want to consider their counterpart EXPS versions with side mounted controls listed below.

Eotech EXPS2 & EXPS3 - Once again these two models are nearly identical with the primary difference being the EXPS3 model being night vision compatible. These modes also feature side mounted controls for easier operation with a magnifier. The EXPS 2 and EXPS3 also feature an intergrated quick detachable Weaver/1913 mount, which has enough additional height to allow for a low co-witness with backup iron sights on many rifles. These sights are slightly taller, wider and heavier than the standard XPS versions. Between the XPS and EXPS the shooter has a good choice of options that allows them to select options like quick detachable mounts and night vision compatibility or save money by getting a model without options they don't need.

Conclusion - While the models covered in the comparison chart are a good representation of what type of optics are in the EOTech sight line there are many more models not listed, for a complete listing of available models visit their website. Those looking for a holographic sight will be looking at EOTech’s as they are pretty much the only game in town. Fortunately, they have a large selection of optics at a variety of different price points. It is also nice to see them offer versions without night vision capability which helps the average user save a large chunk of change if night vision capability is not needed.