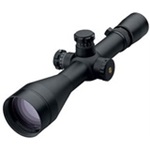 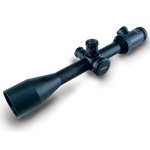 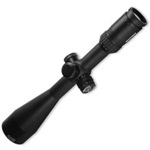 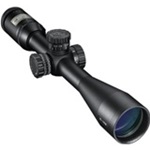 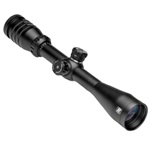 Buying a tactical scope can be a difficult task even if you have a fair amount of knowledge about rifle scopes, because tactical rifle scopes are designed for a specific purpose an incorporate many features not found on other types of scopes. Below are some of the common features found on a tactical scope; each section is broken down into three sections: an "Explained" section where the feature is explained, a "Consider" section which list factors to think about in relation to the feature, and an "Our Thoughts" section which is our take on the feature. 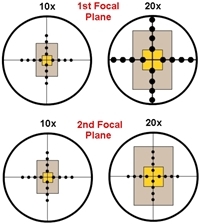 Explained - Many tactical scopes are offered with the reticle in the first focal plane (sometimes called front focal plane) and often abbreviated as FFP. What this means is that as you increase the magnification of the scope the size of the reticle also increases. Contrast this to reticles that are in the second focal plane which stay the same size at every magnification.

Our Thoughts - While both first and second focal plane reticles have their benefits, the first focal plane is generally a good way to go given the first focal plane’s ability to make accurate estimations with long range style reticles at any magnification. However, those that are also interested in using their tactical rifle scope for shooting small targets at long ranges (i.e. prairie dog hunting and target shooting come to mind) would probably be better served with a second focal plane reticle.

Finger Adjustable Turrets
Explained - Tactical scopes should have finger adjustable windage and elevation dials as this allows the shooter to quickly make adjustments to the scope. Contrast this to hunting scopes whose adjustment dials are found underneath screw on protective turret caps. The turrets are also generally taller on a tactical scope both for increased visibility when behind the scope and for a more positive grip.

Consider – Often time tactical scopes come with 1/8 MOA or 1/4 MOA windage and elevation knobs. While the 1/8 MOA offers more precision, it also requires twice the number of adjustment clicks as a 1/4MOA version which can really start to add up when dialing in elevation on long distance targets. Recently there has been a trend toward 1/2 MOA, and even 1 MOA adjustment dials to reduce the number of clicks necessary shoot at long ranges.

Our Thoughts - Most tactical scope would probably be best served by no less than 1/4 increments and possible better by 1/2 MOA or larger adjustments at least on the elevation dial, also consider taking a look at some of the current custom dial systems most manufactures offer, these custom elevation dials can be specifically calibrated to your favorite load and can greatly simplify long range shooting.

Explained - Most serious tactical scopes are built on a 30mm or larger main tube, and 34mm and 35mm main tubes have gained popularity in recent years. A manufacture has several ways to utilize the extra internal space provided by a larger tube, they can: increase the scopes field of view, increase the tube thickness for added strength, increase the amount of internal adjustment for windage and elevation, they can add illumination controls for lighting the reticle, or they can use some combination of the above features like increasing strength and range of internal adjustments.

Consider - While the extra durability and internal adjustments of a large main tube scope are a plus, they do not come without a downside, namely cost and weight. It is pretty much a given that the extra material used in making these scopes will increase the cost; however, weight also needs to be taken into careful consideration. These large tube scopes can weigh 2 lbs on their own before adding a set of rings and a base.

Our Thoughts - While the larger 34mm and 35mm main tube scopes do offer some advantages, the added weight and cost should carefully be considered before deciding to go with one of these larger tubes. Also, don't expect to walk into any hunting store and find these larger rings; while there are getting to be more manufactures of these larger rings they are still pretty uncommon and expensive when compared to 30mm rings.

Unique Reticles
Explained - While the mil-dot style reticles which feature holdover and windage aiming points is still probably the most common type of reticle found on tactical scopes, there are a number of other long range reticles found on these scopes. Some tactical scopes are a variation of the mil-dot like the ½ mil-dot, and others reticles are specific to a certain company and not based on the mil-dot system.

Consider – Some shooters prefer lots of aiming points and hash marks, while others prefer less markings, maybe even a standard duplex with all adjustments dialed in, and a clearer view. Choosing the reticle for a tactical scope is definitely an issue of personal preference and opinions will vary widely on which is best.

Our Thoughts - There are some truly unique and innovative long range tactical reticles being produced, and there is something to be said for the clean view of the duplex reticle with all adjustments dialed in; however, the relative simplicity and utility of a standard mil-dot (or its close variations) is tough to beat. Besides the mil-dots ability to be used for range estimation, it offers a relatively clutter free view, and is a pretty universal system allowing shooters to switch between scope manufactures without learning a new system.

Our Thoughts – Illumination is a nice feature to have but probably not one that will be used a lot by most shooters. Usually the illumination feature will be left in the off position for daylight shooting anyway (there are some exceptions), so it really comes into play in low light situations. If your rifle is for military or law enforcement use, illumination would be a must have, for nearly everyone else consider it a nice but optional feature. 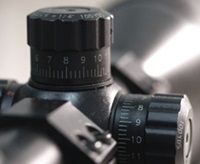 Explained - Tactical scopes have a lot going on; for example, externally you might have a control for illumination (both on and off setting as well as brightness intensity), a side focus parallax adjustment knob, an elevation turret, a windage turret, an adjustable diopter, and a magnification ring.

Our Thoughts – This could be a very long list but here are some of the more important ones. When making adjustments to the elevation and windage dials you should be able to hear and feel the click, so you know the adjustment was made. Also, an illumination knob should never be placed at the 12 o’clock position which will block the view of the elevation dial. Finally, markings on or near the elevation and windage dials should make it obvious to the shooter (while in a shooting position) which direction the dial needs to be moved (i.e. the word “up” and a directional arrow).

Zero Stop
Explained - When shooting at long ranges major adjustments often have to be made to the elevation dial. The zero stop feature found on some tactical scopes allows you to quickly return the scope to its original sighted in zero without looking at the dial or counting clicks if it is dark. Basically, once set the adjustment dial will not rotate past your zero point.

Consider – Say you dial in 13MOA of elevation and want to return to zero, with the zero stop feature you simply spin the knob backwards until is stops and your back at zero and ready to dial in new adjustments. The advantage is two fold: speed at which you can return to zero, and the ability to set to zero without looking at the turret.

Many first time tactical scope buyers tend to lean toward extremely high magnifications models, kind of a bigger is better mentality. However, it is important to consider what ranges and what size targets most of your shots will be taken at. Tactical scopes are best suited for shooting at medium sized targets at intermediate to long ranges that may or may not be moving around. With that in mind keep in mind that FOV (field of view) is important for spotting close and moving targets. Generally speaking most shooters looking for a tactical scope would be well served with a scope in the 4-16x or 6-24x range, as they provide a good field of view at closer ranges as well as enough magnification to shoot at medium sized targets at long ranges. Below are some models that would be good to put on you search list and compare against models you are looking at in that price range.