The popularity of the 300 AAC Blackout round has caused optics makers to take note; and several major optics manufactures have added a 300 Blackout scope model to their line up. For those of you wondering what is a 300 Blackout? It is essentially a .223 Rem/5.56 NATO based cartridge that fires a .308 caliber bullet; therefore making it easy to convert AR-15 variant rifles to .308 caliber.

One of the unique features of a the 300 Blackout is that it is capable of firing a wide variety of bullets weights depending upon its intended use. With lighter grain bullets in the 110 grain to 125 grain range it is ballistically similar to the 7.62x39 round fired by the SKS and AK-47 rifles. Thus many shooters are drawn to the appeal of an AR-15 style rifle that with a different upper can be easily converted to have the capacity and ballistic performance of an AK-47.

This cartridge can also be used with heavy bullets often in the 210 grain to 225 grain range to produce a subsonic load resulting in a quieter sound when fired. These subsonic loads are often preferred by those using silencers for achieving maximum sound reduction when shooting. Obviously, being capable of going light and fast or heavy and quiet make the 300 Blackout a versatile cartridge. This versatility combined with its easy adaptability to the wildly popular and plentiful AR-15 style rifles, is why the 300 Blackout has gained so much attention in the shooting world in just a few years.

The ability of the .300 Blackout cartridge to fire both light fast bullets and then heavier slower bullets for use with suppressors, presents a unique challenge for manufactures when designing a scope for this cartridge . Currently Nikon, Leupold, and Hi-Lux are all making 300 Blackout scopes; while Trijicon and EOTech have also added 300 Blackout options to their unique line of sights.

Nikon P-300 - Nikon has a wide variety of cartridge specific scopes with their unique BDC holdover reticles. The Nikon P-300 scope currently comes in a 2-7 x 32mm configuration and its BDC reticle is setup for firing a 115gr bullet at 2280fps with holdover points out to 600 yards. Those shooting different weight bullets either lighter or heavier with their Nikon 300 Blackout scope can see the yardages the BDC reticle represents for their loads by using Nikon's Spot On website. Update - Nikon has also added a higher end 1.5-6x42 300 Blackout model to their line up called the M-300 BLK which is also available in an illuminated model.

Hi-Lux CMR AK762 - As the name implies this scope was designed for 7.62x39 round fired in the AK-47; however, they state that the 300 Blackout with 110 grain V-Max bullet can also be used accurately with this scope's reticle out to 550 meters. The reticle is unique in that the center can be illuminated, with models available in either green or red illumination.  The intensity of the illumination is controlled by an eleven position rheostat located on the rear of the eyepiece between the 10-11 O'clock position.

EOTech XPS2-300 - Even holographic sight maker EOTech decided to enter into the game and introduced a version of their popular XPS2 sight set up for the 300 Blackout. The reticle is simply a large circle with two dots stacked on top of each other; for heavy subsonic loads the center dot represents 50 yards and the bottom dot represents 150 yards. Conversely, for lighter bullets going at supersonic speeds the center dot corresponds to 100 yards and the bottom dot then represents a 300 yard hold. A simple yet easy to understand graphic of these hold points and yardage is laser etched on the top of the optic for quick reference. 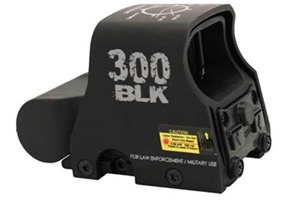 Trijicon ACOG 300 BLK - The well respected ACOG line of combat optics now includes three models that feature a 300 Blackout reticle; while all three models are the same 3x30mm configuration, the center crosshair illumination is available in different color versions: red, green, or amber.  When using supersonic loads the hold over marks are calibrated out to 600 meters. The first two hold over lines representing 300 and 400 meters with supersonic loads feature little diamond shapes on top of them, these diamonds are used as the 50 and 100 meter aiming points for subsonic loads.

Leupold MR/T 300 BLK - This Leupold 300 Blackout scope is part of their high end compact Mark 4 tactical line. The scope is a 1.5-5 x 20mm configuration and features a dot center surrounded by an illuminated 5 MOA circle. This optic features a very unique hold over reticle with calibration for both light and heavy 300 Blackout loads. Leupold choose to dedicate the bottom left holdover lines to subsonic loads, while the holdover marks on the bottom right of the scope correspond to supersonic load aiming points. Subsonic holdover marks extended out to 400 yards and are marked by the numbers 1,2,3,4 to help identify the correct line to use. On the other side, supersonic load aiming point extend out to 900 yards and holdover lines 4,6, and 8 or marked for reference.

There are now a lot of very solid 300 Blackout optic options for those wanting to get the most out of this cartridge. While the Leupold is very versatile, being set up for both light and heavy bullets and both close and extended ranges, its high price tag will rule most shooters out. The EOTech XPS2 300 BLK makes a lot of sense for those generally shooting at man sized targets at closer ranges, but the near $500 cost and limited overall range will be an issue for some. Ultimately, the Nikon P-300 will probably make the most sense for the majority of 300 Blackout shooters who want an affordable optic that can be used with both heavy and light loads, and shot accurately at both close and long ranges.